Introduction to the CRIC House

the Anarchist Bed&Breakfast and Retreat Centre

so, many people talk and think about what to do to save the world and alleviate suffering, or improve the world and make it sustainable. some people take the approach of reform: improving existing conditions within the socio-economic context they are in. others might support revolution which means a complete change of the existing context. some act locally, others act globally.

here at the CRIC house we take the approach of local revolution. very local, very revolutionary: we are attempting to create human settlement that practices the utopian vision we carry. we start small, and maybe we’ll end up small too. but in the meanwhile we are creating living conditions that facilitate kindness, cooperation, education, art, fun, friendship, and maybe other things we are not even aware of or have words to describe (and maybe even not all of them are good). no clear dogma yet. this is an on-going experiment in what it takes to create good life for the human animal.

as people try to analyze what’s wrong with this world and how to make it better they might have different points of view of where to start. They often argue about whether it is media that’s to blame or politics, economics, the legal system, cooked food, or the ban of nudity and drugs. Well this sort of chicken-egg-feather argument is not only circular (because of the feedback loops in social systems) it’s also boring. we think about creating a better world in creating a complete substitute, not just repairing one of the symptoms or even several of the symptoms, even if these symptoms have some causal element.

so,we do focus on culture as a pivotal thing in this web of problems. we try to change it to something better. Something that allows for cooperation more, not just because cooperation is more efficient economically (it might not be) but because it’s more fun in many other ways.

back track: what does CRIC stand for?

Cultural Rehabilitation Internship Center. we believe mainstream culture does not only possess some addictive substances; it itself is addictive. and like most drugs, not in a good way. without getting into the psychology of addiction, what we are attempting to create here is a healthy and balanced culture and internship opportunities for outsiders to come experience and participate in it. For example, people are often overwhelmed and burdened by all the illusion of choices presented to them by the dominant culture of where to work, what to consume, then they just watch TV, work, consume, die. We wish to offer people a place to uhm ah basically relax. Where one can slow down enough to perhaps even get a chance to notice all the ways in they were socialized by growing up watching TV. It’s not like we don’t have any of those addictive tendencies, but we keep educating ourselves about our addiction to control our lives, and construct a life in which one doesn’t need to exert so much control just to feel safe.

mmm... where do we start this?

we all know that the purchasing power of the consumer is higher now than it has been in all our recorded history, but life satisfaction isn’t (there are lots of different measurements for this trend from psychopathology to subjective reports and stress levels). so how is it that the ability to acquire what you want does not make you happy? it turns out that when people are able to create what they think they want they produce things like refined sugar, cheap entertainment, luxury items that are suppose to make the have-nots feel impoverished, crack, meth, cocaine, bleached white flour, and other scary powders. but we humans don’t create all the things that we need; it took a lot of disease and research to find out what vitamins are. which is to find out what was lacking in this synthesized diet. we now have to figure out what specific elements are lacking in our socio-emotional-spiritual beings, in order to (re)create a more wholistic living / wholistic culture.

oh yea, and our modern culture is not sustainable, and it requires quite a bit of abuse of other lands and people to survive.

how do we go about changing our culture?

economically: we facilitate our economic and ideological interdependence and let the cooperative culture sprout out of that. instead of everyone working and shopping outside full time we try to internalize our economics so that shelter, food, education, and friendship are largely locally produced and traded. e.g. when you find a box of eggplants in the dumpster you wouldn’t get it if you lived alone. but if you live in a co-op you know you can bring it home and someone will be excited to make something out of them and everyone will be excited to eat them. this enables an economy of larger scale than one person, but not too large (globalized capitalism) that would depersonalize the transaction.

same goes for many other levels of tools, knowledge, and materials, child care, decision making, parties, that would reach the efficiency level where it is feasible but not too big as to get ugly or shapeless all together.

as for living sustainably, there are a lot of aspects to sustainable living that would be a real challenge when living alone. both in time commitment, motivation, and feasibility. it is all easier in a group.

how is this different from permaculture?

it’s not, what’s the problem? the idea is that we bring permaculture more into the social realm and less focused on landscape design per-se.

what our community isn’t: (easier to define)

we don’t bother with making a lot of policies, procedures, and certainly no systems of punishment for non-abiding members; but as far as anarchists go we are not all that focused on smashing the state but on rebuilding better local culture. many communities spend a lot of time scheduling and processing; that is, accommodating for individual variations and the limited resources people have for community. We don’t. community is the main thing we are doing so we don’t mind meetings and work. we have a fixed schedule for some things and the rest is spontaneous whatever. we don’t know what to do with people who are upset that they weren’t informed that work party is going to meet in front of their house because they really wanted to see the birds sing that morning and we disrupted it. we don’t deal with much dissatisfaction though we are fascinated with what brings it about. ultimately people that are upset about little things that disrupt their plans don’t fit in here. it’s people that are excited by little unplanned things that do.

wait! you said the “B” word in reference to culture! what kind of an elitist are you?

we do mean better culture: happier and more sustainable means better. the only reason we’re sure that it’s happier is a rather tautological reason: we are happier in our new culture than we were elsewhere so other people like us would also be happier. We’re sure that this culture just doesn’t fit some people. that’s fine. What clearly makes this culture better is relative: it’s supply and demand: there are too many people who are unhappy in the mainstream and want more connection, nature, simplicity, et cetera and aren’t finding it.

you are telling me that a bunch of people living primitively and eating out of the dumpster and acting silly consists of a seed for a revolution???

based on what we know if everyone in the world lived like us one planet would be enough for everyone in the world. not like we’re so damn cool - the bottom 25% of this world consumes much less resources than even we do. but, we’re doing this intentionally and are having a good time.

so if the extent of what makes you sustainable is your circumstantial poverty that puts you at 3rd world level, what kinda of innovation are you offering here?

we have an unusual combination of 1st world education and continued scientific inquiry along with the willingness to live 3rd world standards. We think we have a trick how not to get sucked into drugs, sit-coms, consumerism, competition, hostility, and loneliness. but we’re not sure. time will tell.

we can’t describe it. it’s an emergent property of the lifestyle. but another part of the trick is maintaining a community of people who like living communally. so it’s about finding the right clientele.

do you really live in 3rd world standard of living?

no, not really. there’s so much wealth being wasted around us that it’s impossible to not consume some of it. But we’re working on reducing our ecological footprint even more.

what kind of work do you do?

we wish we could say that we are full time restoration ecology super-heroes or biodynamic bad-asses or perfect permaculture practitioners. most of the work we do consists of usual domestic stuff such as dishes, processing dumpster or farm food, organizing the tool shop, doing repair and maintenance, hosting couchsurfers. besides that we care for animals, collect firewood, do some construction projects (such as the praxis village); we also do work for the broader community which some is volunteer and some is paid; and the last is restoration work of fire management and erosion control and stuff like that.

on the face of it, there are no obvious differences: we don’t wear funny hats or have serious hunting rituals. people that have visited got the impression that we do a lot of things that are not for us: we study economics but not for school; we take care of the chickens who don’t belong to us; we go to recycle town to get plumbing fittings even though we are not planning to use them personally or any time soon. we repair bikes and cars that don’t belong to us; and we dumpster dive and can food to distribute it to many other people. it’s not so much that we have diffused identity; it’s more like we see things that need to be done and change that needs to happen in the world, so we try to be/do that change.

what it actually looks like resembles a functional family more than a roommate situation. so we do things together and live together, but unlike families, we spend more time trying to live better from an ecological perspective. so even though it’s more work, we feed the chickens our left-overs and we dumpster dive meat for the cats. yea, it’s inconvenient; but if you feel like your life is good enough and there’s nothing else better to do it’s not really a problem.

is it more like a work camp or an anarchist free-for-all?

it depends on your initiative and motivation level if you decide you want another project such as a worm-bin and or to build a terrarium for your stuffed animals we are available as your work crew. if you feel shy and confused as to what we are doing and why, and just go along with everything we do, you could end up feeling uninspired.

what if i don’t know how to work on cars, bikes, operate a tractor, use a solar oven and what if i’m afraid of chickens??

that’s so awesome! that’s why it’s an internship and it will give us an excuse to spend more time with you.

what if I don’t have the endurance or time to work so much?

um, we don’t actually work that much; we just wanted to give the impression that we do so we can filter out some people. but if you read this far you’ve shown enough endurance.

our life&style doesnt really include responding to (or even reading) eschmail, sorry about that. you should still try to eschmail us!

how guests, and you, sometimes feel at CRIChouse.

other blogs by gil 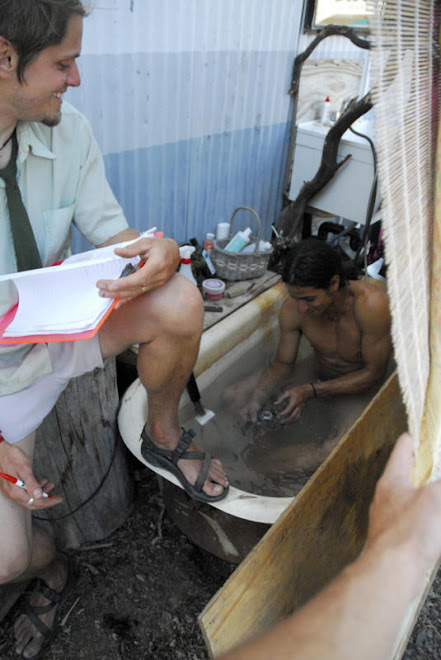